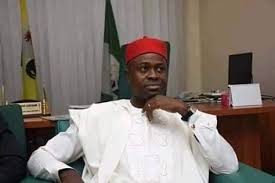 A communications expert and trade partner attached to one of the mobile telephony companies, Chinedu Anaukwu, has accused a member representing Anambra East/West Federal Constituency in the National Assembly, Chinedu Obidigwe, of attacking and beating him to a coma, with the help of “hired” thugs.

Anaukwu, who spoke to journalists on his sick bed at Life International Hospital, Awka, Anambra State, on Monday, said the incident happened inside the residence of a Catholic priest, Rev. Fr. John Manafa, at Aguleri community in Anambra East Local Government Area, on Saturday.

He claimed that Primus Odili, the former Chief of Staff to former Governor Willie Obiano, was also present when Obidigwe and his thugs attacked him.

Meanwhile, Aguleri is the hometown of Obiano.

Anaukwu and Obidigwe are also from the same Aguleri community and belong to the Aguleri WhatsApp platform, where they engage each other in critical comments.Anaukwu said the beating caused him serious body and facial injuries, as he was rushed to the hospital, where he is critically ill.He added that his various critical comments about Obidigwe on his social media handles led to the attack on his life by the senator