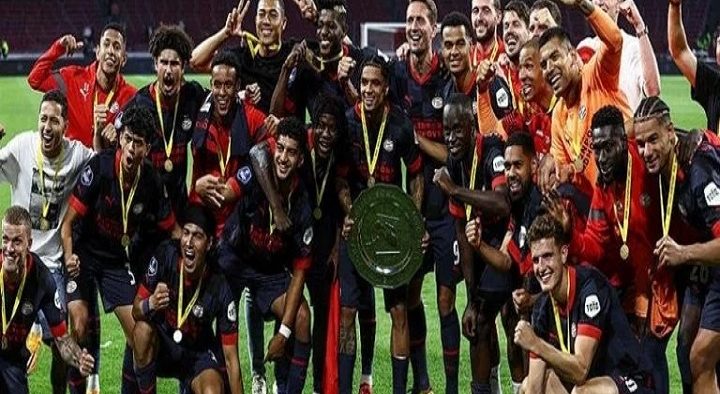 PSV Eindhoven defeated Ajax 5-3 to lift the Dutch Super Cup at the Johan Cruyff ArenA in Amsterdam on Saturday with both giants of the Dutch Eredivisie under new management.

A hat-trick from Guus Til with contributions from Cody Gakpo and the new teenaged recruit from Paris Saint-Germain Xavi Simons secured PSV their 13th Super Cup.

Ajax’s Steven Bergwijn, signed from Tottenham Hotspur for a Dutch record 31 million euros this summer, opened the scoring after quarter of an hour, with Til handing PSV a 2-1 lead at half-time.

Ajax were back level on 54 minutes courtesy of their Brazilian winger Antony before being caught out by goals from Gakpo and Til’s third after the hour mark.

This meeting of the Dutch league’s greatest rivals lived up to all its hype as Ajax set up a tense ending thanks to a sublime half-volley by Mohammed Kudus.

But Ajax, reduced to 10-men after the sending off of Calvin Ughelumba with 11 minutes left on the clock, were unable to pull off their fight back as Simons completed PSV’s victory with their fifth goal seconds from the end.