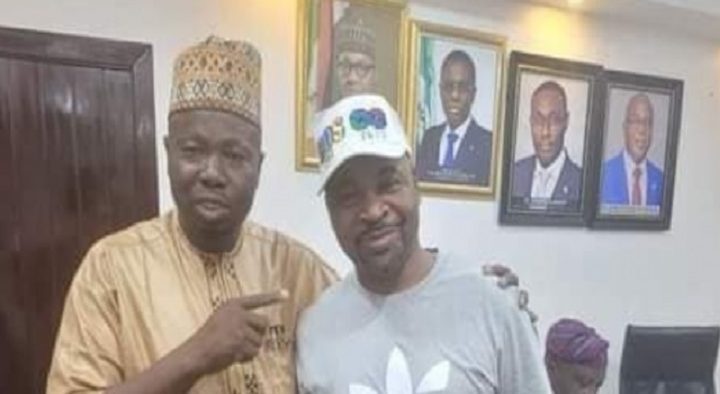 Two transport union leaders in Lagos State, Azeez Ajibola, aka Istijabah; and Musiliu Akinsanya, aka MC Oluomo; appeared to have sheathed their swords and have agreed to work together.

The two leaders have been at loggerheads for months over the control of motor parks and garages in the state and their lieutenants have repeatedly engaged in violent clashes in many parts of the state.

However, Media gathered from sources familiar with the matter that the two union leaders were invited to a reconciliation meeting at the Ministry of Transportation in Alausa this week.

The meeting was attended by MC Oluomo; Istijabah; the Government Liaison Officer of the state’s parks management committee, AIG Hakeem Odumosu (retd.); officials of the transport ministry, amongst others.

In a video released to his Facebook page, Istijabah said the squabble was over.

Istijabah, who spoke in Yoruba, said, “God has settled the disagreement between myself and MC Oluomo. I said everything I said about him in anger and they were untrue. The people at the Ministry of Transportation have settled the whole matter.

“Presently now, from myself as the Zonal Chairman of Zone C and all the excos and all branch chairman, we have joined the Park and Garages established by the Lagos State Government. The progress of Lagos is our responsibility.”

Also, the spokesperson for MC Oluomo, Jimoh Buhari, in a telephone chat with Media on Friday, confirmed the development.

He said, “MC Oluomo has agreed to work with Istijabah following the intervention of the state government. They have worked together before and he is ready to work with him again.”

Lagos State Commissioner of Transport, Frederic Oladeinde, in a telephone interview with correspondent on Friday confirmed that the parks management committee had been working on resolving the union crisis in the state. “I don’t see why other unions won’t come under the Parks Committee,” he said.

Also, an aide to Governor Babajide Sanwo-Olu, who chose anonymity, welcomed the development and said it is in the interest of peace and stability of the state.

MC Oluomo, formerly the chairman of the Lagos State chapter of the National Union of Road Transport Workers, had been embroiled in a protracted conflict with Istijabah over the control of parks and ticket sales and lives had been reportedly lost while some persons were injured during their numerous fracas.

MC Oluomo had rejected Istijabah as TOOAN chairman in the state and the national body of NURTW in Abuja had suspended him (MC Oluomo) which led to his withdrawal from the union and the suspension of the NURTW by the Sanwo-Olu government.

The governor subsequently appointed MC Oluomo as the parks management committee chairman whilst the NURTW National President, Tajudeen Baruwa, appointed Fatai Adeshina, aka Akeweje, as the NURTW Caretaker Committee Chairman in the state but Akeweje faction had not taken over as it accused MC Oluomo of seizing the NURTW secretariat in the abattoir area of Agege in Lagos.

The NURTW under the leadership of Baruwa has lost about three states in the South-West including Lagos and the governors have replaced the transport union with parks management committee.

According to a 2021 report by the International Centre for Investigative Report, the Lagos chapter of NURTW generates about N123.08bn annually, which could service the annual budget of Nasarawa, Niger, and Yobe states put together.