Atiku offered me the vice presidential ticket in 2007 –Tinubu 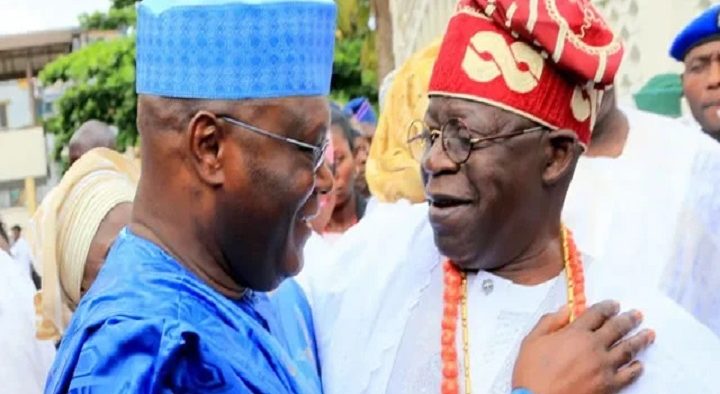 Asiwaju Bola Tinubu, on Saturday slammed his counterpart in the Peoples Democratic Party, Alhaji Atiku Abubakar, for allegedly stoking religious bias in a bid to win the 2023 presidential election.

Tinubu said the former vice president was a hypocrite for using the issue of a Muslim-Muslim ticket as a political strategy, adding that Atiku was exhibiting traits of desperation by stoking religious bias on national television to win the election.

The former Lagos State governor stated this in a statement by his media officer, Tunde Rahman, while reacting to claims by Atiku during an interview with Arise News on Friday that he dropped Tinubu as a running mate while running for president in 2007 because they were both Muslims.

“Atiku has no business raising the issue of a Muslim-Muslim ticket except as a hypocrite. Perhaps he believes people have forgotten his antics during the 1993 election. After he woefully lost his bid to be the presidential candidate of the Social Democratic Party, what did he do? He canvassed and lobbied harder than anyone to become the running mate to late Chief MKO Abiola. When it benefitted him personally, Atiku did not see anything wrong with a Muslim-Muslim ticket. He saw everything right in such a ticket as long as he was on it.

“We are saddened to see such a man become unhinged from the truth. So obsessed is he with his quest for office, Atiku is willing to render any form of untruth if he thinks it might gain him a single vote. Atiku may want to be President. However, all he has shown is that he is pathological.”

“I feel sorry for dear old Atiku. Love of his own ambition has eclipsed his relationship with the truth and an honest account of the past. We formed the AC without his knowledge. When (former) President (Olusegun) Obasanjo virtually exiled him from the PDP, we lent him our support by giving him the Action Congress platform for the 2007 election,” the statement quoted the former Lagos governor as saying.

Tinubu further described Atiku as a man with a “paucity of character and love of intrigue”.

“Let me say openly that Atiku offered me the vice presidential ticket in 2007. Let me also say that my religion has not changed. When he offered the position to me, I was a Muslim and I believe he was aware of my religious faith at the time. Atiku’s calculations and deceit had nothing to do with religion or his sensitivity to it. His conduct has everything to do with what we discovered about his paucity of character and love of intrigue.

The APC national leader reiterated that he arrived at the choice of a former governor of Borno State, Senator Kashim Shettima, after weighing his options and due consultations with stakeholders of the party.

“All my life, the decisions regarding the team supporting me have always been guided by the principles of competence, innovation, compassion, integrity, fairness, and adherence to excellence. I was not going to depart from these principles at this important juncture. In fact, it was more important than ever before that I adhere to these principles,” the statement added.

Also, the National Chairman of the South West Agenda for Asiwaju 2023, Senator Adedayo Adeyeye, accused the PDP of distracting Nigerians by campaigning against the Muslim-Muslim ticket of the APC. Adeyeye said the bigger issue was the fact that the opposition party jettisoned its North-South power rotation formula prescribed by its constitution.

The senator said, “The PDP is trying very hard to put the issue of Muslim-Muslim ticket on the front burner. But to me and for any patriotic Nigerian, it is a mere distraction. It is a desperate attempt by the PDP to clutch at any straw at all when they are just too aware that they are headed for the dungeon.

“So, those who are promoting this should know too well that they are just desperate to clutch any straw to keep them afloat because it is their futile attempt to prevent their dropping into the bottom of the sea.”

But the PDP presidential candidate has challenged the former Lagos governor to make himself available for a live interview to demonstrate his capacity to lead the country.

“Mr Tinubu has not sat down to do any prolonged interview for obvious reasons. Nigerians have seen him talk in public and can themselves gauge the reason why he is mortified to do so,” Atiku said in a statement signed by his media adviser, Paul Ibe, and made available.

The former vice president faulted APC leader’s claim that he (Atiku) breached the law by engaging in business while serving as a Customs officer.

He said, “Again, the Tinubu campaign betrayed either dishonesty or lack of attention to detail by claiming that Atiku Abubakar said oil contributed 20 per cent of Nigeria’s GDP. That is a lie. What the Waziri said is as follows: Oil only maybe accounts for about 20 per cent of our GDP. The use of the word, ‘maybe,’ by the Waziri was in reflection of the different figures given. While the Nigerian Bureau of Statistics states a figure close to 10 per cent, other multilateral organisations have given a much higher figure of between 15 to 20 per cent.

“So, while the jury is still out, it is right to qualify the contribution of oil and gas as a maybe. However, we do like to point out that Waziri Atiku Abubakar mentioned both the PDP and the APC during the interview and did not forget the name of his own party. It seems the Tinubu campaign organisation (can a disorganised body be called an organisation?) does not know the meaning of rotation of power and micro-zoning. So, we will gladly educate them.”

“Rotation of power refers to a constitutional provision where power is zoned between North and South. Micro-zoning refers to a non-constitutional idea, where power is zoned not between North and South, but amongst geo-political zones. We hope this cures the political illiteracy of the authors of that document. In conclusion, we would like to challenge Bola Tinubu to subject himself to an hour-long interview, as the Waziri did, and if he is able to be as articulate and mentally present as our candidate, then he can talk. Until then, we will only want to remind him and his yes-men that they are not in a position to point fingers when they have not sat on the hot seat,” he added.