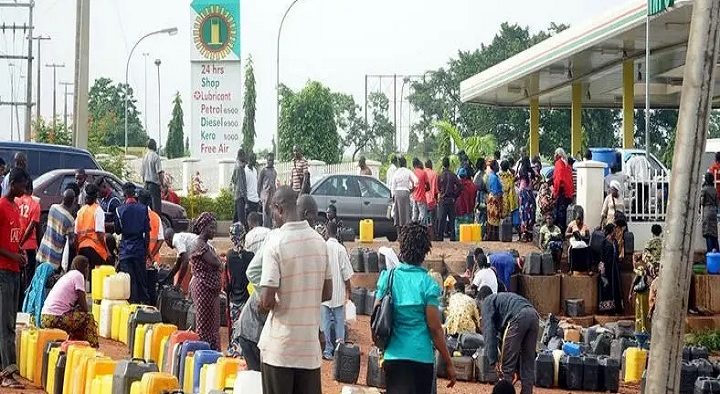 Premium Motor Spirit popularly known as petrol will now be sold between N170/litre and N190/litre in filling stations across the country, following what is believed to be a subtle agreement between Federal Government officials and oil marketers.

Findings by Media on Sunday revealed that the development was the outcome of a meeting between the Nigerian Midstream and Downstream Petroleum Regulatory Authority and oil marketers on Thursday.

Sources privy to the meeting said it was agreed that the pump price of petrol should be increased by N10 per litre.

A market survey on Sunday revealed that price display boards at some petrol stations in Lagos reflected new prices starting between N170 per litre and N175 per litre.

However, some other filling stations sold above these prices, with some selling as high as N185/litre.

Oil marketers denied holding a meeting with the NMDPRA on the subject matter but sources close to the matter confirmed to our correspondent that the meeting actually held.

The officials said the NMDPRA agreed marketers could increase their pump price to N165-N175/litre for filling stations inside towns, and a maximum of N190/litre for those on the outskirts.

The NMDPRA could not verify this claim as of press time on Sunday.

The spokesman for the NMDPRA, Kimchi Apollo, did not respond to several calls made to his telephone line.

However, marketers under the aegis of the Independent Petroleum Marketers Association of Nigeria confirmed the fuel pump price hike to our correspondent.

Osatuyi, who also denied that a meeting held between oil marketers and the Federal Government on Thursday, however, disclosed that there was a fresh increase, describing it as a “market fundamentally determined price.”

“Petrol is now available and as you can see, the queues in Lagos and Abuja have disappeared. We are businessmen and it’s impossible for us to run at a loss. Marketers are allowed to sell at a minimum price of N170 and a maximum of N180. There’s something we call market fundamentals; this is what came into play here. This is because it is impossible to bring the product into your station at N170 and sell at N165,” he added.

When asked if there was a circular from the NMDPRA to the effect, he responded “no”, adding, “there was no meeting but what you saw was simply an increase due to market forces.”

Explaining further, he said the Pipelines and Product Marketing Company’s price template, which has the current official price of N165/litre, was arrived at about 12 ago.

“The template is 12 years old when the dollar was still N175 and diesel was sold at N200/litre. Now, diesel is around N850. Even major oil marketers have changed their price boards to reflect the new band. It’s no more hidden. It is better for fuel to be available at N180 or N185 than buying at N250 from black marketeers. Now, no more boys going around with jerry cans, you can drive in and buy with ease”, he said.

Meanwhile, findings showed on Sunday that fuel queues at petrol stations in Lagos and Abuja, which had lingered since February, suddenly disappeared over the weekend following the latest development.

Meanwhile, economist and Chief Executive Officer of the Centre for the Promotion of Private Enterprise, Dr. Muda Yusuf, told The Press that the current price is not sustainable.

According to him, the government is in the best position to control the prices of petrol if it cannot control diesel prices.

He said, “Already, National Bureau of Statistics reports make us understand that except for Lagos, Abuja and other big cities, petrol prices are already above N165/litre. That is the market reality, except the government doesn’t want private entities to get involved in the market because these guys are there to do business and not to run at a loss. These marketers share their figures with everybody. Most of these guys are based in Lagos and they transport their products in trucks that run on diesel. Can the government control the prices of diesel? If they can’t then, they should hand off regulating prices. They should first resolve the surging diesel prices and challenges at the depots before pouncing on marketers. Otherwise, their businesses will close down, and black marketers will take over the business – that’s when we will see more adulterated products capable of burning down houses and cars,” he said.

Also, a former Chairman of the Major Oil Marketers of Nigeria, Tunji Oyebanji, declined to comment on the new price but told correspondents that the Federal Government’s price template was old and needed to be updated.

He said, “Nobody had any meeting with the NMDPRA. The only thing we have continued to say is that N165/litre is not sustainable because the template with which that price was arrived at made all the elements therein fixed and unchanged. Elements such as coastal, NPA, NIMASA jetty throughput, storage and financing, which were used to arrive at the ex-depot price were all based on the old dollar and old diesel prices.

“All the items on the template have currently gone up because of the exchange rate which impacted our operating costs due to the high cost of diesel. As of the time when the template was done, diesel was N130/litre, now it is N800 which allows for an operating cost of N4.00. That is why N165/litre cannot work. Nobody is saying price should be this or that, but that government should come to our aid.”

According to him, if the price is not increased, marketers will soon go out of business.

Also reacting, a former Group Chairman/Chief Executive Officer, International Energy Services Limited, Dr Diran Fawibe, said, “The whole process is not transparent. If we had allowed market forces to determine prices, we wouldn’t be in the dilemma that we are currently in. Everybody is just throwing up figures and at the end of the day; it’s the consumers that will pay for it.  But as long as the government keeps giving subsidies, marketers will expect subsidies to keep increasing, and until we start to refine products in-country, the whole business will not just be murky but will soon turn into a monkey business.”