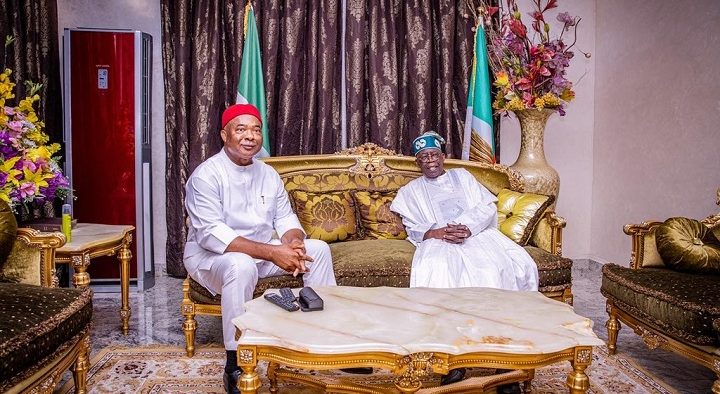 Imo State Governor Hope Uzodinma has reacted to the certificates saga of the presidential candidate of the All Progressives Congress (APC), Bola Tinubu, saying that if the record-keeping of the Independent National Electoral Commission (INEC) is efficient and its server functional, the candidate does not need fresh submission of his documents.

The governor said this after his Thank You visit to President Muhammadu Buhari for approving the hosting of the Army Day celebration in Owerri, saying it will strengthen the measures already on the ground to contain banditry and insecurity in the region and send strong signals to criminals.

Tinubu had indicated in an affidavit submitted to the electoral body that he did not attend primary and secondary schools.

The former Lagos governor, however, claimed he had two degrees from two American universities, which he further stated were stolen by unknown soldiers during the military junta of the 1990s.

“But for my presidential candidate, the issue of certificates shouldn’t even arise. In 1999, he contested elections and became the governor of Lagos; in 2003, he contested election as second-term governor of Lagos. He ran and won as a senator in the country. Where record-keeping is efficient, and INEC server is functional, he doesn’t need to do fresh submission,” the Imo governor stated.

“However, if whatever he is supposed to submit is not handy, it is not late yet. I’m sure before the time he will submit whatever is required of him.”

The Imo governor responded to his Adviser on Political Matters, Dr Batos Nwadike, who resigned his appointment and accused him of running a non-inclusive government and owes him N27 million.

Nwadike, who alleged that his former principal owes him N77.2 million, expressed disappointment in Uzodinma’s failure to run an inclusive government outside his chosen insular inner circle. He said he was repeatedly left in the dark and denied access to power in a government despite his over 20 years of political Association.

Reacting to the development, the governor said: “You know, politics and leadership is a business that thrives on ideology. Sometimes, you hire aides who by your own primary assessment, you think would be able to fit into the ideology and your vision for your people. So if the way things are going to the best of their own idiosyncrasies is not consistent with the thought process. It means that they are licensed to try their luck in another place.”

Asked if he has paid the N77.2 million that Nwadike claims he is owed, the governor said: “So this aide who accused his boss of non-inclusiveness, unfortunately, we’re not running a limited liability company, where shareholders must all via for. So I accepted his resignation and I wish him the best of luck in his future endeavours and that brings the matter to a close.

“I don’t know how I will owe N77.2 million to an aide, you talking about my political adviser, I don’t know what he sold to me that I bought.”