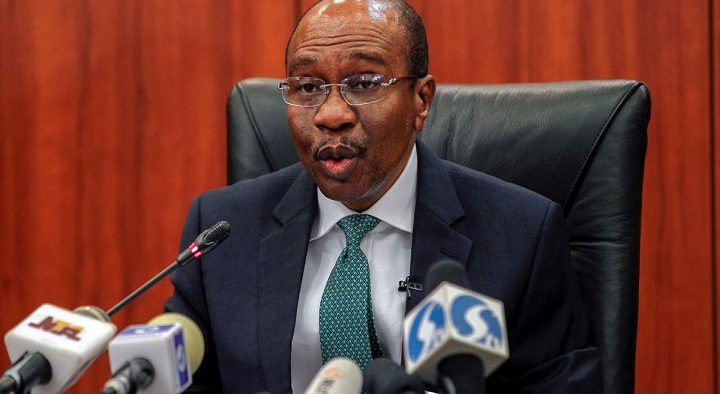 The Central Bank of Nigeria (CBN) has announced plans to stop selling foreign currency (forex) – US dollar, euro, pound sterling, among others – to banks.

The apex bank had put Deposit Money Banks (DMBs) on notice that it will stop selling forex to them by the end of 2022.

While announcing the introduction of what it called The RT200 Programme, the CBN said it was ripe for the banks to source for their forex by funding entrepreneurs with ideas, skills and support to make them responsive and attract foreign currencies to Nigeria.

This was disclosed by CBN Governor Godwin Emefiele at the Bankers’ Committee press briefing on Thursday.

Experts said the new policy by the CBN if properly handled, would reduce pressure on the naira, increase productivity, expand exports, attract foreign exchange to the country and create job opportunities for the people.

The experts said there was no shortcut to foreign direct investment, recalling that they had earlier told the government that stopping disbursement of forex to bureau de change operators alone will not save the naira and that the way to resolve the problem must be all-encompassing, including holding banks to account.

What the new intervention entails

Emefiele, in his speech, said “After careful consideration of the available options and wide consultation with the banking community, the CBN is, effective immediately, announcing the Bankers’ Committee “RT200 FX Programme”, which stands for the “Race to US$200 billion in FX Repatriation.”

The CBN governor said the new policy was directed at the non-oil export sector.

“The RT200 FX Programme is a set of policies, plans and programmes for non-oil exports that will enable us to attain our lofty yet attainable goal of US$200 billion in FX repatriation, exclusively from non-oil exports, over the next 3-5 years,” he said.

The apex bank boss noted that the country could not continue to depend on FX earnings to fund its import from a product it could not determine in both price and quantity.

Emefiele further disclosed that the CBN would be reviewing its intervention programmes going forward to ensure that they continue to achieve the desired results.

“Although interest rates on our various intervention facilities were expected to revert to 9 per cent effective March 1, 2022, we are announcing that the rates would remain at 5 per cent for another year in view of the promising trajectory we have established in economic growth and job creation.

“In effect, the concessionary interest rate of five per cent on our intervention facilities would now be extended until March 1, 2023,” he said.

Why banks must generate their forex

The CBN governor said the commercial banks do not have a choice but to begin to explore ways of generating their forex.

“I said to them at the meeting that the era is coming to an end when your customer has a demand for $200 million and you move all the requests to the CBN.

“Before, or about latest, the end of this year, we will tell them don’t come to the central bank for foreign exchange again. Go and generate your export proceeds, fund people who want to generate export proceeds and when they come in, you can sell to your customers that want $200 million.

“Maybe when we see the record of export proceeds you have generated, we will give you 10 per cent of it.

“So, you must go and join the race to build your foreign exchange from your export customers to fund your import customers,” he said.

The naira-for-dollar scheme, which started on March 8, 2021, was originally scheduled to end on May 8, 2020. But the apex bank said the scheme would continue indefinitely. With the scheme, diaspora remittance recipients are rewarded with an extra N5 for every dollar wired through the official routes.

The apex bank governor said: “I believe that the lessons we have learnt from our policies on remittances can be applied in improving some aspects of FX inflow into the country.

“Most of them are unreliable sources that are perennially prone to exogenous vicissitudes of global economic developments.”

The Value-Adding Export Facility will provide concessionary and long-term funding for businesspeople who are interested in expanding existing plants or building brand new ones for the sole purpose of adding significant value to Nigeria’s non-oil commodities before exporting the same.

He said this is important because the export of primary unprocessed commodities does not yield much in foreign exchange.

“The unfortunate thing though is that out of the 758,000 metric tons that are exported annually, only 16.8 per cent is processed. The rest are exported as raw sesame, raw cashew and raw cocoa, thereby giving Nigerian farmers an infinitesimal part of the value chain in these products.

“For example, the global chocolate industry is valued at about US$130 billion. Of this amount, Cote D’Ivoire, Ghana and Nigeria account for more than 72 per cent of global cocoa exports.”

Our correspondent reports that the Non-Oil Commodities Expansion Facility will also be a concessionary facility designed to significantly boost local production of exportable commodities.

It will be designed to ensure that expanded and new factories that are financed by the Value-Adding Facility are not starved of inputs of raw commodities in their production cycle.

Also, the Non-Oil FX Rebate Scheme is a special local currency rebate scheme for non-oil exporters of semi-finished and finished produce who show verifiable evidence of export proceeds repatriation sold directly into the I & E window to boost liquidity in the market.

According to Emefiele, “Analogous to the Naira4Dollar Scheme, which has helped boost remittances from only $6 million per week to over $100 million per week, we shall establish the modalities for granting a rebate for each dollar that non-oil exports proceed that an exporter sells into the market, for the benefit of other FX users and not for funding its operations.

“Although this rebate programme is with immediate effect, the detailed guideline of this scheme will be communicated next week. Our plan is to graduate the percentage of the rebate depending on the level of value addition into the product being exported.”

The third anchor of the RT200 Programme is the construction/establishment of a Dedicated Non-Oil Export Terminal.

Why Nigeria failed to get it right

According to the African Centre for Supply Chain Practitioners, Nigeria loses about US$14.2 billion annually due to congestion at the ports.

Shedding more light on this, Ahmed Sani, a financial expert said the decision by the CBN to task banks to source for their forex was good.

“The banks are in custody of billions of dormant money that does not benefit anyone simply because the CBN is there shouldering the problems of everyone,” he said.

“My only concern is policy inconsistency and my prayer is that the CBN will stand its ground this time around and ensure that banks and entrepreneurs do the needful.

“If we achieve empowering our farmers to produce food and cash crops for export, and we also encourage our entrepreneurs to add value to what we produce ahead of export, the foreign exchange will flow into the country and the pressure on the naira will ease up,” he said.

Another analyst, Michael Sambo, said if the banks support local production with the mind set for export, the naira will regain its strength.

“The naira is losing its vigour because we are lazy. Everyone rushes to the CBN for foreign exchange to travel out of the country for medical or leisure tourism, for education and to import toothpick and tissue paper.

“We should allow the foreign exchange coming in through oil sale to be used in providing infrastructure for Nigerians,” he said. CBN Governor Emefiele said a dedicated port will be capable of creating over 100,000 direct and indirect jobs and would provide a huge boost to the quest for significant improvement in non-oil export earnings in Nigeria.

“Let me emphasise that under this arrangement, loans to companies wishing to expand or build new plants that will generate verifiable export proceeds for the economy shall remain at 5 per cent per annum for 10 years loans inclusive of two years moratorium,” he added.

A seasoned chartered accountant and chairman, Manufacturers Association of Nigeria Export Group (MANEG), Ede Dafinone said: Anything the government does to encourage export is a welcome development.

“I am happy to see a focus on industries where we have an international competitive advantage.”

Dafinone was recently appointed to the board of the Nigeria Export-Import Bank (NEXIM). He said the CBN should put a mechanism in place to ensure robust monitoring and evaluation.

“There have been other efforts at supporting export in this country and they are bearing fruits and we have to continue the trajectory because when you see what the likes of the United Arab Emirate are doing, say in the area of renewable energy, it is a phenomenon.”