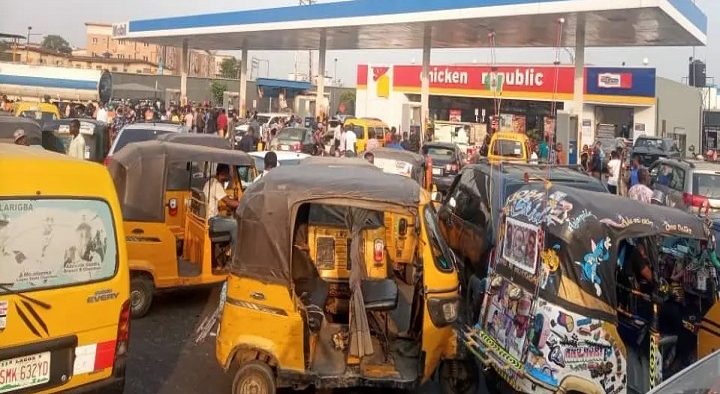 Though there were products at these filling stations, which also sold at N165/litre, motorists struggled to get gasoline with which to run their economic lives.

There were also queues in states bordering the FCT, including Nasarawa and Niger.

In the Federal Capital Territory, there were long queues at various filling stations such as the NNPC, Mobil, A.A. Rano, AYA Ashafa, Enyo, among others.

Hundreds of motorists besieged the few filling stations that dispensed petrol at various states, spending hours on queues in a bid to buy PMS.

Oil marketers blamed the development on the drop in supply, stating that the demand for petrol was currently higher than what was being provided by the Nigerian National Petroleum Company Limited.

NNPC is the sole importer of petrol into Nigeria, shouldering this responsibility for more then four years.

Speaking on the development, the President, Petroleum Products Retail Outlets Owners Association of Nigeria, PETROAN, Billy Gillis-Harry, said, “Lagos is having queues today, Kaduna is almost not having any PMS in its retail outlets.

“So, it is simply a situation of demand overwhelming supply. The supply process is not efficient to be able to meet the demands for products.”

Asked to explain whether there was not enough product, Gillis-Harry replied, “Well, clearly, if there is product, it should be delivered. However, I know the authorities are doing their best to make sure that everyone is monitored and encouraged to sell products at the approved pump price.

“But there are no products in the retail outlets, which is why there will be queues. So, it clearly shows that demand has overwhelmed supply.”

But lastThursday, the Nigerian Midstream and Downstream Regulatory Authority had stated that there were over 32 days sufficiency of petrol by the NNPC.

Also, it was learnt that the NNPC intentionally cut down supply of products to fuel marketers.

A source familiar with the matter told News media that marketers, two weeks ago, had a meeting with the marketing arm of the NNPC and the Pipelines and Product Marketing Company, PPMC, where they were quizzed on diversion of petroleum products to neighbouring countries.

According to the source, the supply of products to oil marketers was subsequently reduced due to issues around product diversion.

“We had a meeting with PPMC two weeks ago where we were told that the volume of product we load is too high. So, the NNPC has reduced the volume they give to us,” the source said.

Nigeria consumes an estimated 60 million litres of fuel per day. However, findings showed that by PPMC’s record, marketers loaded as much as 106 million litres per day as of April.

“So, PPMC kept lamenting and asking us where the extra products go. Of course, we all know that they go to neighbouring countries where they are being sold at higher prices. Apart from the fact that diesel price for transporting products is on the high side, fuel is a product highly subsidised by Nigeria, and Nigerians are not allowed to enjoy the benefits,” our source disclosed.

Diesel is a deregulated product. Checks on Monday showed that the product was sold between N780-N820/litre.

“That’s why marketers find it difficult to take products to the North. I don’t know why Lagos is experiencing scarcity. Already, buying and transporting the product to my station is at N170 per litre. So, how much will I sell? That means price has increased itself. If you go to states like Ibadan, Ekiti, Akure, it’s impossible to see the price at N165 because cost of transporting one litre is already N20. So, by the time you take it to states like Ekiti, you already have it at N182,” our source added.

“As of last week, there were some talks about low stock and suppliers not giving products, but I think it’s a temporary glitch because NNPC told us they have sufficient stock of fuel,” he said.

Fuel sold at N165/ltr in places like Ikorodu, Anthony, Surulere, Ikeja, Festac, Ago and VI in Lagos on Monday, but prices were higher at Isheri and its neighbouring towns.

In a telephone interview with The PUNCH, the National Operations Controller, IPMAN, Mike Osatuyi, said the scarcity was no fault of oil marketers.

Meanwhile, the Secretary of the Independent Petroleum Marketers Association of Nigeria, Akeem Balogun, in a statement on Monday, said that considering the current price, it is impossible for the product to be sold at N180 per litre.

Balogun advised members to sell at a sustainable price within their environment adding that they should ensure that the price is on their pump.

According to him, “On this note, members are hereby advised to sell at a sustainable price within their environment. Just make sure that the price is on your pump. Kindly contact the Secretariat should you have any authority challenging your operations”

Share this post
Previous Article
QUOTE OF THE DAY
Next Article
Ekiti2022: SDP to make decision on legal option today