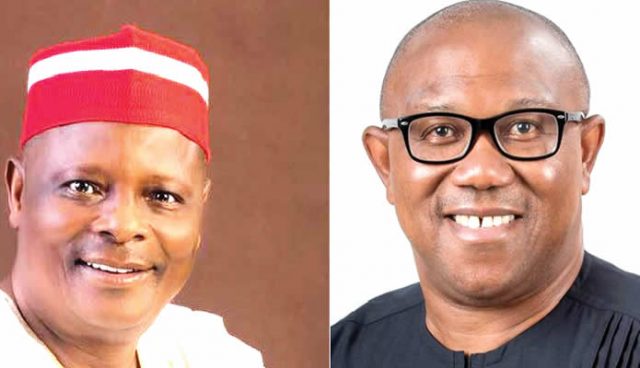 Before the primaries conducted by various political parties to field candidates for the 2023 general elections, several parties, political groups and prominent Nigerians were in the news over their search for a ‘Third Force’ that would dislodge and end the dominance of the ruling All Progressives Congress and the opposition Peoples Democratic Party. The two dominant parties have been governing Nigeria at the presidential level since 1999.

While the PDP governed for 16 years,  from 1999 to 2015, the APC took over in 2015 and has spent seven years in power. The next presidential election will hold in 2023 when the APC would have spent eight years and the ‘smaller’ parties are currently aligning and realigning forces in their bid to take on the APC and the PDP. However, the planned mergers and alliances seem not to have materialised yet.

However, individual parties and candidates seem to be making efforts, perhaps from the regional and zonal levels. Out of the 18 parties presently registered with the Independent National Electoral Commission, the APC and the PDP included, two other parties are getting the attention of the electorate, especially in their strongholds. They are the New Nigeria People’s Party and the Labour Party. The NNPP and the LP have been in existence before now, with the latter winning elections in previous general elections. But, perhaps, due to their presidential candidates, they are now under the public spotlight. While a former Governor of Kano State, Senator Rabi’u Kwankwaso, is the candidate of the NNPP, a former Governor of Anambra State is running for the Office of the President on the platform of the LP.

Not only that, close watchers of events and the politicking going on in Kano State, which is considered to be the base of the NNPP and Kwankwaso, have expressed fears over the widening popularity of the opposition party under Governor Abdullahi Ganduje of the APC. It is worthy to note that Kano presently has three influential politicians – Ganduje, Kwankwaso and another former governor, Ibrahim Shekarau. It will be noted that the trio have always formed alliances – two against one – in the previous elections. This time, Kwankwaso dumped the PDP for the NNPP while Shekarau quit the APC to join Kwankwaso.

The fears are also based on the fact that Kano is strategic to the electoral victory of the APC, especially that of its presidential candidate, Asiwaju Bola Tinubu. The North-West is said to have the highest voting population in the country (followed by the South-West), with Kano, which Ganduje often describes as a swing state, having the biggest voting bloc in the geopolitical zone. In the South-West, it is Lagos where Tinubu was its two-term governor. The block votes in Kano were said to have been so attractive that the annual Tinubu Colloquium, a lecture series marking his birthday, which is usually held in Lagos and Abuja, with political heavyweights and allies in attendance, was moved to the state in 2021.

However, Kwankwaso and his NNPP are said to be staging a political tsunami against the APC in Kano, with mass defections recorded in the state already, including close aides to Ganduje and prominent members of the Tinubu Campaign.

Obi of the Labour Party was a member of the PDP until a few days before the presidential primary that produced former Vice-President Atiku Abubakar as its standard-bearer. Some presidential aspirants like Obi in the PDP had left the race, with one of them describing the scramble for delegates’ votes as “obscenely monetised.”

Perhaps, Obi saw the handwriting on the wall. He defected from the PDP to the LP. Being from the South-East where there are agitations over an alleged marginalisation of the zone – a zone that has never produced a president for the country, sentiments from the area have been in Obi’s favour.

Those following Obi’s campaign have also noted the massive youth support he enjoys especially on social media. Though INEC has said virtual support doesn’t count but actually ballot votes, several ‘influencers’ are now mobilising for registration and collection of Permanent Voter Cards by eligible Nigerians, also in the move to end APC and PDP’s reign.

A Professor of Political Science at the University of Nigeria Nsukka, Emmanuel Onyebuchi, stated that should parties have to choose their vice-presidential candidates from the South, and they cannot pick Obi from the South-East geopolitical zone, then they should look for one in the South-South.

Onyebuchi said, “Let me start by saying that one of the mistakes made by the PDP was to frustrate Obi out of the party. Things are changing seriously in Nigeria. The frustration and the hardships that the citizens are suffering have made them start looking for men of integrity and impeccable character, and such people are very few, and Obi is one of them. I don’t know what actually transpired. Obi leaving the PDP is a very big minus for the party because some of us had already concluded that he was going to be the running mate to Atiku because we have looked around and there are just one or two credible candidates remaining. I don’t know what happened, even with Atiku himself. It is a real problem now. It is a very big problem now because I don’t know any other candidate that commands the respect and trust within the South-East like Obi. He has the backing of the Church and so on. I can see people awakening from their deep slumber; you can see the rush for PVCs. People are charged; people are highly mobilised right now.”

The lecturer added, “For the PDP, I think the best option left for them now is to look for a credible candidate from the South-South.”

However, a ranking member of the House of Representatives, Aminu Suleiman, who is representing Fagge Federal Constituency in Kano and once announced his plan to obtain Nomination and Declaration of Interest forms of the APC for Tinubu for N100m, said the NNPP lacked the political structure to beat the ruling party in the state.

Speaking on the chances of the APC and Tinubu getting block votes despite NNPC’s growing popularity, Suleiman said, “As a politician, I would not want to say I will not lose sleep, I can only tell you that I am going to sleep with my eyes open.” He also stated, “I concede to the fact that Kwankwaso is a household name. He is a politician of repute but I can tell you that the APC is still the party to beat in Kano.”