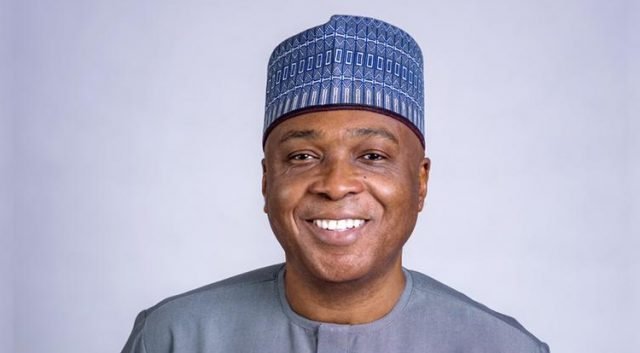 Former Senate President, Dr Bukola Saraki, has said he voted against a Muslim-Muslim presidential ticket when the All Progressives Congress was consulting on who would be chosen as the then party’s candidate and running mate in 2014.

In a statement by the Head of his Media Office, Yusuph Olaniyonu, Saraki responded to the recent remarks made by a presidential candidate and national leader of the party, Asiwaju Bola Tinubu, in Abeokuta, Ogun State.

The PUNCH had reported that Tinubu, while on a consultation visit to the delegates in the state, had reeled out how he put the President, Major General Muhammadu Buhari (retd.), Governor of Ogun State, Dapo Abiodun, among others, in Nigeria’s political limelight.

Tinubu had said he went to Katsina, Buhari’s home state, to persuade the president to contest, and subsequently, supported him to win in 2015.

He said his opposition to the Muslim-Muslim ticket was in the interest of the multi-religious nature of the country, adding that it helped the APC to win the election in 2015.

He stressed that the decision of himself and other party chieftains to pick a Christian Vice President was not a move to sabotage Tinubu’s presidential ambition.

He also accused Tinubu of using covert and overt measures to undermine the 8th National Assembly and pitching the legislature against the executive, when Saraki was elected as the Senate President in 2015.

The statement read in part, “When I and other leaders of the All Progressives Congress in 2014 stood against having a Muslim-Muslim ticket, it was not a decision targeted at any individual or group but one taken in the national interest.

“Asiwaju knows this and he is just being mischievous by presenting this decision as something aimed at stopping his ambition.”

Meanwhile, leaders of major socio-political organisations in the northern and southern regions have criticised Tinubu, over his recent statements regarding his aspiration to be president in 2023.

The spokesperson for the CNG, Abdul-Azeez Suleiman, described Tinubu’s action as a show of desperation, which he said, was unbecoming of a politician seeking to lead a people.

“What Tinubu just did is one such desperation that is unbecoming of a politician seeking to lead a people. On the whole, we, like many other concerned citizens, are disappointed by this outburst by Tinubu,” Suleiman said.

Also, the spokesperson for Ohanaeze Ndigbo, Chief Alex Ogbonnia, said Tinubu was being used by the political class to create division between the South-East and the South-West.

“At this point, he is supposed to begin to help to galvanise the South to create southern unity and checkmate the northern emasculation of both the South-West and South-East.”

He further urged the President create an environment conducive for a south-easterner to emerge as APC’s presidential candidate.

The President of the Middle Belt Forum, Dr Pogu Bitrus, also reacting, said, “Our position has been clear and we use logic. If a northerner would have ruled for eight years, the presidency should rotate to the South.

“We are in a democracy and there are processes for selecting a contestant. The National Assembly has passed the Electoral Act to him which he signed.

“One person does not make a consensus. So, whichever technique they agree to, we will see it a few days from now because time is running out.”

However, the Asiwaju Bola Ahmed Tinubu Presidential Campaign Organisation said the address by Tinubu was to remind national delegates of his contributions to the formation and the emergence of the party.

A statement by the spokesperson for the campaign organisation, Bayo Onanuga, indicated that Tinubu’s references were factual and in public knowledge.

He, however, expressed concern that Tinubu’s address had been misconstrued by the opposition to denigrate the President and divide the country across ethnic lines.

He claimed that the presidential candidate helped gain victory for Buhari at the polls in 2015.

Sani, a PDP chieftain posted in a tweet on Thursday, saying, “Actually, Jagaban has played a leading role in the emergence and victory of PMB in 2015; but politics doesn’t always respect or appreciate history,” he posted on his verified handle.