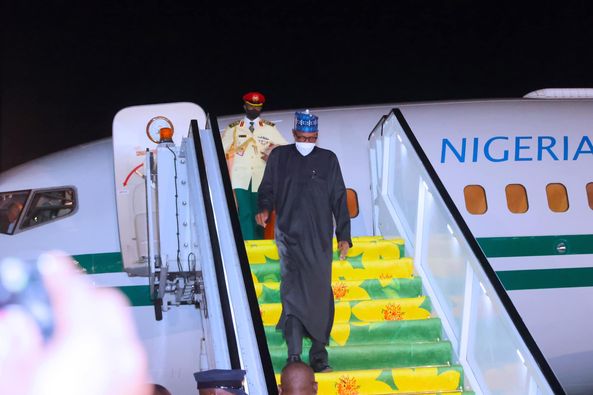 He returns amid uncertainty in the governing All Progressives Congress over the signing of the Electoral Amendment Act, especially the section pertaining to the eligibility of statutory delegates to vote in the forthcoming primary elections.

Buhari, who departed Abu Dhabi at about 1:30 pm on Saturday, landed at the Presidential Wing of the Nnamdi Azikiwe International Airport, Abuja, around 4:00 pm, alongside members of his delegation.

On Friday, he joined the Jummah prayers for the repose of the soul of the late leader. In a short tete-a-tete with the new President afterwards, Buhari expressed hopes that both countries would strengthen existing ties in the areas of sustainable security, counterterrorism and trade and investment.

Other members of his entourage include the National Security Adviser, Major General Babagana Monguno (retd.) and the Director-General, National Intelligence Agency, Ahmed Abubakar.